Biking the Little River Rail Trail is a thoroughly low carbon footprint adventure that is sportive and idyllic, perfect for a day trip out of Christchurch  city.

Cycling along the Little River Rail Trail is a delightful little day trip for all who enjoy the road less travelled. One gets a great view of the Canterbury plains and the hills in the distance. The deep blue waters of the Halswell river accompanies you for the start of the journey until you reach the bright expanse of Lake Ellesmere, where a multitude of birds dot the landscape of the Birdlings Flat. The destination town of Little River is a popular stop for its cafe and art gallery. It also features the historical train station and has many scenic walking trails.

In order to complete the journey to and from our store, we used 2 eZee Sprint equipped with 2 x 19Ah Li+ batteries with each electric bike. In our double rear rack panniers, we packed our additional battery, a hearty picnic lunch, a supply of water and headed off to Little River where we had made an appointment to meet up with friends for a picnic gathering at 11.30am.

The single trip journey from town to Little River took 3 hours and was 60kms long. With the Canterbury plains being nice and flat, is was a fairly easy ride especially with electric bikes. Almost anyone capable of riding a bike should be able to complete the trail without much difficulty. The only exception to the smooth sailing trip was the strong winds that blew along the lake on our way back, luckily the batteries we had prepared were enough to make the complete round trip with electric assist.

A thoroughly low carbon footprint adventure that is sportive and idyllic, perfect for a day trip out of Christchurch city. 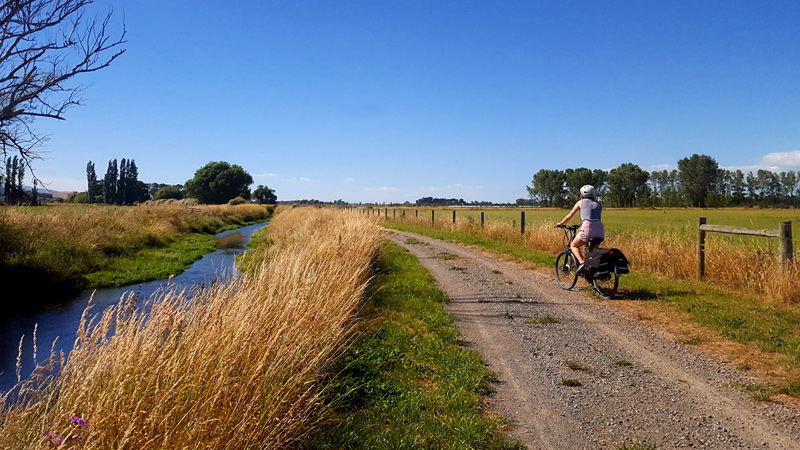 This section of the Railtrail, opened in September 2009, starts about 400 m south of the Shands Road/Halswell Junction Road intersection on Shands Road where a small car park is available.

This section of the Rail Trail, which opened in November 2006, starts at the Birchs Road/Trices Road intersection and is a seven kilometer off-road ashphalt pathway alongside Birchs Road to the township of Lincoln. It runs alongside the original railway line through pleasant rural surroundings and is wide enough to enable cycling in both directions.

The start of quiet streets, crossing into farm lands and having the Halswell River run alongside of the trail.

This section, plus most of the section between Birdlings Flat and Little River, were the first to be opened to the public in May 2006. The Railtrail, from Motukarara, is on public land managed by the Department of Conservation (DoC). The area is also pursuant to a unique Management Plan administered by the Te Waihora Management Board (Department of Conservation and Ngai Tahu).

Most of this section of the Railtrail runs alongside Te Waihora (Lake Ellesmere), where the railway embankment is raised above the lake and adjoining wetlands, affording magnificent views of the surroundings and the prolific birdlife.

The trail passes the Kaituna Quarry Reserve, the Kaituna Lagoon and  Kaitorete Spit, the largest landform of its type in New Zealand. There is significant natural, cultural and historical interest along this section of the route. Kaituna Valley and Kaituna Lagoon are of particular importance to many Canterbury Papatipu Runanga.

The original Motukarara station was restored and relocated on to the trail at the Fiddlers Road entrance by the Lincoln Rotary Club, who were also responsible for landscaping the Station area.

At the Ataahua Reserve (Kaituna Quarry) the car park and landscaping were provided by the Hornby Rotary Club. The car park is accessed directly from State Highway 75. DoC has installed a toilet on the approach path between the Railtrail and the Kaituna car park.

This section traverses along the old railway embankment until closer to the Little River township. In places where the old railway ballast is loose, a new surface of compacted gravel was installed.

Much of this section travels beside Te Roto o Wairewa (Lake Forsyth). The Wairewa Runanga is developing a Mahinga Kai Cultural Park in this area and has established the Takuahi Research and Development Company to oversee this work. This group has been the lead organisation in the development of this section of the Railtrail.

There are toilets at Catons Bay and in the Little River township.

Top 5 things to do in Christchurch in 5 hours

Leave a reply Click here to cancel the reply